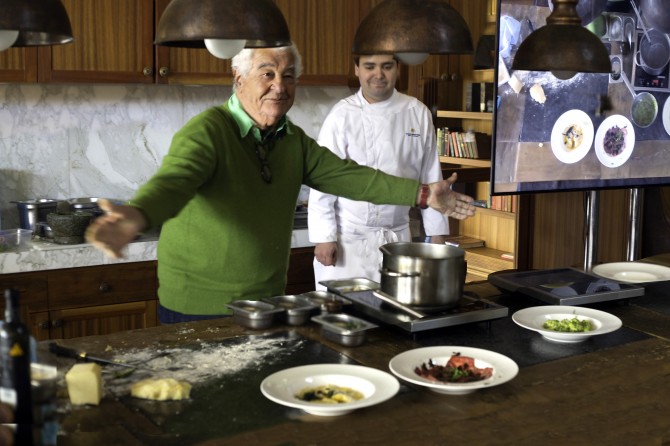 Here’s a 14 minute video that we’ve just finished of the cooking demonstration that Antonio gave as part of the Truffle Festival event at the Emirate Wolgan Valley Resort & Spa in the Blue Mountains. He was going to cook just two truffle dishes but there was a request for a gnocchi dish so he whipped up (mashed up?) a gnocchi genovese.

It’s the simplicity of Italian cooking that Antonio holds in high esteem, one main ingredient treated without fuss. He calls his style MOF MOF (as he says. “to take the piss from the other fashionable food styles”) Minimum Of Fuss, Maximum Of Flavour.

The three recipes are available as individual videos.

Did you know that Carpaccio was a painter and this dish was created at Harry’s Bar in Venice? Wikipedia says ”

“Carpaccio is the international name of a typical Italian dish made with raw meat. The dish was proposed with this name for the first time in Venice, at the time of an exhibition dedicated to Venetian painter Vittore Carpaccio which took place around 1950.

The dish, based on the Piedmont speciality “carne cruda all’albese”, was invented and popularised by Giuseppe Cipriani, founder of Harry’s Bar in Venice. He originally prepared the dish for the countess Amalia Nani Mocenigo[1] when he learned that the doctors had recommended that she eat raw meat.[2] The dish was named carpaccio after Vittore Carpaccio, the Venetian painter known for the characteristic red and white tones of his work.”

Meanwhile, over on Regional Food